This story is entitled “The Embarcadero” and it’s been published in a lovely little zine called The Bitchin’ Kitsch. It’s to be found in the May 2014 issue, on page 16. “The Embarcadero” isn’t exactly a break up story (though it’s enough of a break up story that an editor or two has informed me they prefer not to publish break up stories). Rather, in my mind, it’s more about a missed connection. I think most people have seen love thwarted by circumstances that would otherwise seem peripheral. We have experiences in which we just can’t seem to get the timing right. The story is also just a moment, and I will never stop being thrilled by the narrative potential of small and insignificant acts.

The Bitchin’ Kitch lives up to its name. The zine’s progenitors are two people, Chris and Dana Talbot-Heindl. These humans are of nebulous age and origin, but I like to imagine them with dual work stations set up in a basement apartment of some Midwest suburban triplex, living beneath a grandmother (possibly one of their own) and expelling a lot of creative energy. As you can see in their bios below, they cover a broad swath, from graphic design, to creative writing, to dub step, and even from afar their passion is infectious (I want them to be my friends). They also make a bitching calendar (which was, I admit, partly what prompted me to seek publication with them – I still haven’t submitted my photo for consideration, but I intend to.) 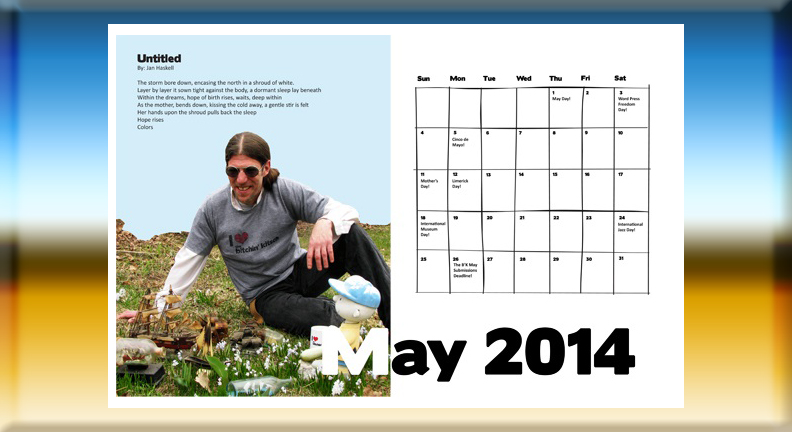 The Bitchin’ Kitsch is a zine for artists, poets, prose writers, or anyone else who has something to say. it exists for the purpose of open creativity.

If you have something you want to share, please email it to chris@talbot-heindl.com. Are you a video or music artist? Submit your YouTube link or original file to dana@talbot-heindl.com. All submissions are due on the 26th for the following month’s issue. Please review the submission guidelines on our Submissions page before submitting your work.

The Talbot-Heindl Experience is just that – an escapade of exposure to the sophisticated knowledge of a Talbot-Heindl.

Contact with a Talbot-Heindl is a unique experience in that there are only two beings in the known universe of that name and when you work with one, you get the complete package – work, personality, and wit.

With each new episode of exploit with a Talbot-Heindl, you are guaranteed a good humored, creative, but also professional job well done.

Chris Talbot-Heindl: I was born in a relatively benign city to a relatively benign family and should have grown to become a relatively benign person. However, my penchant for reading novels about the downtrodden in America and political/social events in my life has shaped me into an indignant person and artist. As a person whose wool has been undeniably pulled from my eyes, I feel an unquenchable urge to run around pulling the wool from others’ – to help other people realize that the government and society of this nation does not give a rat’s ass about the individual, but as individuals, we cannot afford to conform. The only answer to America’s conformity is disobedience, and I intend to disobey wherever humanly possible.

Dana, aka McFishenburger, enjoys long walks on the beach, David Hasselhoff, and Beavis and Butthead, aheh-heh. He is big into video games, making electronic music, artistic endeavors, and one-upping MacGyver. In his spare time, he beta tests unreleased video games, dismantles and rebuilds computer equipment in a never-ending battle agains the BSOD, creates thumptastic wubwub, and makes sassy comments and art. He hopes to one day become a creative director for EA Games, travel overseas, and to live in a warmer climate on an art commune. 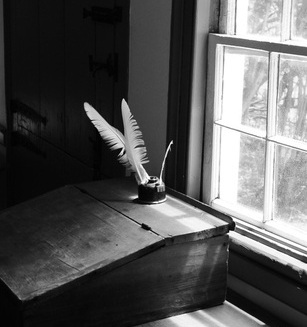 I am so pleased to announce my most recent publication.  The story is titled “Je Vais Bien,” and the periodical is Black and White – one of the amazing journals being published out of Red Ochre Press.

The story is a gem.  It’s about a man who traps himself so deeply in a web of lies that he doesn’t see any escape. It’s a street wandering story, because there are times at which, faced with nothing else to invest one’s time in, the only thing to do is simply go outside and pretend that you have a destination.

Unfortunately, the most recent update is that Red Ochre Lit has gone defunct, and the publication is no longer available for purchase. Which I feel is so unfortunate, because not only was the publication releasing quality literature, but the declared politics of the publishers were commendable.

“It is a mysterious and complicated business, bringing together muscles and brain, memory and desire, and a rhythm of motions and subconscious impulses…No wonder most good writers approach writing with just a twinge of terror in their bones.”  –Richard Marius
RED OCHRE PRESS exists as a publishing house and a community advocate for all things literary. We publish premier, contemporary literature. This includes poetry, fiction, nonfiction, interviews & essays. While our primary goal is to showcase the work of experienced authors, we feature emerging writers as well. A multicultural organization, we venerate voices from around the world, taking pride in writers whose work is both innovative and captivating.

This press was founded on the belief that reading and writing are becoming dying pastimes. In a world where people choose daily to flip through 1,000 channels instead of pages, writers must perfect their work and present it via widely accessible media venues. First and foremost, however, we, as writers, must lose our fear of rejection and submit polished pieces for publication.

Truly, this represents the crux of RED OCHRE LiT, BLACK&WHITE, CATEGORY 2, and ROLiT NEWS, resoiling the grains of our literary ancestors and what they worked so hard for.

To really drive this notion home, RED OCHRE PRESS offers a number of local workshops to help writers refine their literary crafts. We have groups geared for youths and adults. Our FELLOWSHIP PROGRAMS not only usher writers into their creative zones, but also takes them through an actual publication journey. Students mold their skills, creating powerful literature as they build a readership. This is paramount in a writer’s literary universe and it is key to reviving the world’s interest in reading.

You will also be thrilled to learned about our new REVIEW & PROMOTION SERVICES. Learn how RED OCHRE PRESS can help in your publication journey. We review manuscripts, offer editorial suggestions to strengthen  pieces, and help to promote your work!

SIDE NOTE: RED OCHRE LiT & BLACK&WHITE are currently accepting submissions and we invite you to read our past archives and SUBMIT your work!

Lastly, monetary donations help maintain a foundation for our works, all of which are printed. We ask that you participate in our KEEP RED OCHRE ALIVE CAMPAIGN.

Cheers to yet another wave of writing!

Until next time,
Editors of RED OCHRE PRESS

Mimi Ferebee is the editor-in-chief of RED OCHRE PRESS, overseeing the publication of RED OCHRE LiT, ROLiT NEWS, and BLACK&WHITE.
While originally from California, she resides in Virginia with husband, Melvin, and son, Melthias Jai.

A graduate of the College of William and Mary, she received degrees in both English (emphasis in Creative Writing and Literature) and Psychology (emphasis in Behavioral and Developmental Science).

She recently retired a career as a clinical therapist to pursue her primary passions of writing and editing full-time. When not working on completing her novel “In the Distant Marshes” and various other literary projects, she diligently works to complete applications for doctoral programs. She wants to obtain a PhD in English Literature.

Mimi also works with at-risk youth, refining their reading and composition skills. She spends many evenings in detention centers and twice as many weekend mornings at libraries working with this population. She prides herself on being an advocate for her students, helping them not only perceive, but achieve their potential.

Look for upcoming publications in the award-winning journals, African American Review and phati’tude Literary Magazine. She will also have features in the revered Obsidian: Literature in the African Diaspora, James Dickey Review, Reverie: Midwest African American Literature, Pirene’s Fountain, among others.